INNOVATIVE JOURNAL OF MEDICAL AND HEALTH SCIENCE (ISSN: 2277-4939)” scientific journal or the ICI Journals Master List 2018 evaluation. Based on the information submitted in your journal’s questionnaire our experts calculated your Index Copernicus Value (ICV) for 2018. ICV 2018 = 90.09

The rising burden of type 2 diabetes mellitus globally has led to huge morbidity and socioeconomic impact in developing countries. In India, too, it has become a silent epidemic and it is estimated that there are over 60 million diabetics. Although in recent years, a lot of research papers have come up on the management of diabetes, latest treatment modalities may not be affordable to all. So, it becomes imperative to prioritize research on prevention and primary care. Magnesium is an intracellular cation and coenzyme for various reactions of the glycolytic pathway. Hypomagnesemia has been shown to precipitate hyperglycemia and has, therefore, been implicated in insulin resistance and its microvascular complications. Poor glycemic control has been associated with retinopathy. Hence, we evaluated association of serum magnesium with T2DM and diabetic retinopathy.

The increasing burden of type 2 diabetes worldwide has caused significant morbidity and socioeconomic impact in developing countries. Also in India it has become a silent epidemic (2014) and it is estimated that there are more than 60 million diabetics. Although in recent years, a lot of research has been done on managing diabetes, the latest treatments may not be accessible to everyone. Therefore, it is necessary to prioritize research in the field of prevention and primary care. Magnesium is an intracellular cation and enzyme for various reactions from the glycolysis pathway. It has been shown that hypomagnesemia leads to high blood sugar and, consequently, it has been implicated in insulin resistance and its microvascular complications. Poor blood sugar control was associated with retinopathy (2013) . Therefore, we evaluated the association of serum magnesium with T2DM and diabetic retinopathy.

The study was conducted in 120 cases with PIC. Three study groups were selected, 40 diabetic patients without retinopathy, 40 diabetic patients with retinopathy and 40 non-diabetic health controls of the same age group. 80 type 2 diabetes mellitus with a 10-20 year history of diabetes in the 40-65 age group. Included and analyzed for the presence of retinopathy and 40 health controls. Retinopathy was assessed by direct and indirect ophthalmoscopy.

Excluded: Patients with a history of uncontrolled hypertension, chronic diarrhea, alcoholism, use of diuretics, and decreased kidney function were excluded from the study.

Samples Collection: Blood samples were collected by intravenous puncture using syringes and needles that can be disposed of under precautions Aseptic and transferred to clean and dry bottles

ANOVA Statistical analysis: The present study is designed as a case control study and statistical analysis was done to determine the difference between the groupsWild, Roglic, Green, Sicree, and King (2004) . The results are summarized in tables and figures. Data were analyzed using Statistical Package for Social Sciences (SPSS) version 16. Results were expressed as Mean ± SD. Mean differences between the groups were analyzed using ANOVA (Analysis Of Variance). ANOVA gives a statistical test of whether the means of several groups are all equal. Therefore it is used to test whether there is significant difference among two or more independent groups. The p value of < 0.05 will be taken as the level of significance. 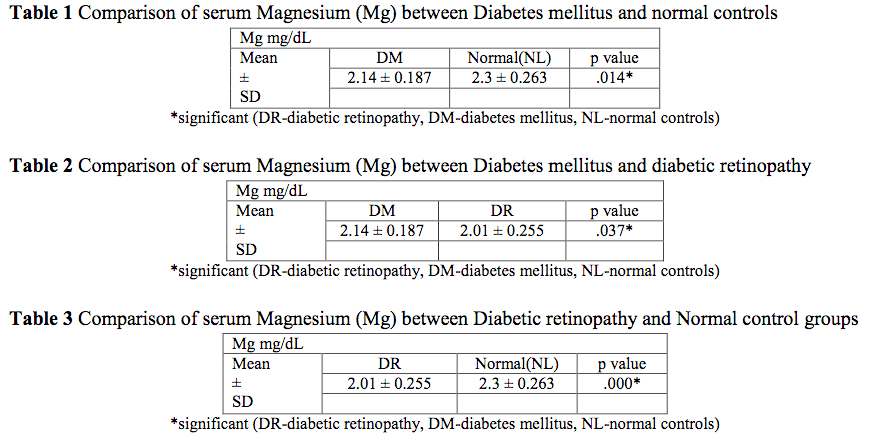 Hypomagnesemia has long been shown to be a relatively common finding in patients with diabetes, and the lower the magnesium concentration in these patients, the greater the impairment of glucose clearanceRamachandran, Ma, and Snehalatha (2010); Whiting, Guariguata, Weil, and Shaw (2011) . Currently, the mean serum magnesium level was significantly lower in diabetics with retinopathy compared to uncomplicated diabetics with abnormal controls (Table 1,2,3). The results were similar to those of the studies by Ishrat Kareem et al, Ceriello A et al,Resnick et al. (1991) Hatwal etal. As a metabolic cofactor, Mg is important in energy metabolism and glucose homeostasis.Erasmus, Olukoga, Alanamu, Adewoye, and Bojuwoye (1989); Kao, Folsom, Nieto, Mo, and Watson (1999) Low levels of Mg can prevent phosphorus-dependent reactions to many enzymes linked to glucose metabolism. In addition, low Mg levels can impair insulin receptor function through increased plasma microviscosity and, thus, decrease insulin sensitivity.Yesudian, Grepstad, Visintin, and Ferrario (2014) . The kidney's poor ability to retain Mg may be due, in part, to hyperglycemia in diabetes. Magnesium activates more than 300 enzymes in the body and is a critical cofactor of many enzymes in carbohydrate metabolism. Magnesium is involved in several levels in insulin secretion, activity and bindingMcnair, Christensen, Christiansen, Madsbad, and Transbøl (1982) . Low magnesium levels can reduce insulin secretion by the pancreas. Mg2 + deficiency inhibits glucose metabolism through the TCA cycle to suppress ATP production. Mg2 + deficiency and reduced ATP production inhibit Mg-ATP synthesis and, thus, ATP-sensitive K-channel activation, Pham et al. (2005) resulting in suppression of insulin secretion. Besides,

As insulin itself stimulates the intracellular uptake of magnesium into insulin-sensitive cells, magnesium deficiency forms a vicious cycle, inhibiting the action of insulin, primarily by inhibiting the insulin that binds to the receptor and the intracellular metabolism of the glucose. These mechanisms result in insulin resistance and glucose intolerance, leading to diabetes. Very recently, evidence suggests that hypomagnesemia inhibits insulin receptor tyrosine kinase activity, and this may explain the development of magnesium deficiency insulin resistance.Mather et al. (1979); Yesudian et al. (2014) Ma et al. (1995); Walti, Zimmermann, Spinas, and Hurrell (2003)

Mean serum magnesium levels were significantly lower in diabetics with retinopathy compared to non-complicating diabetics and normal controls. • Diabetes is involved in maintaining normal body Mg concentrations, especially in patients with poor diabetic control, leading to more spontaneous diabetic complications. In addition, hypomagnesemia can lead to the development of diabetes and its complications, especially when there are other associated risk factors. Mg deficiency can not only be a secondary consequence of diabetes, but can also precedeAl-Qassabi, Elsayed, and . (2009); Wild et al. (2004); Yesudian et al. (2014) and lead to insulin resistance and glucose deterioration, and even type 2 diabetes and low magnesium levels also high atherogenic properties, because it promotes endothelial dysfunction and thrombogenesis through platelet aggregation and vascular calcifications.

The main implication of this study is that low levels of serum magnesium confer a higher risk for type 2 diabetes. Although type 2 diabetes is a multifactorial disease, these findings increase the possibility of increased consumption of magnesium, along with changes in other risk factors. Type 2 diabetes could be an innovative way to prevent type 2 diabetes. Other workers have documented that oral magnesium supplementation improves insulin sensitivity and metabolic control in type 2 diabetics. Some limitations of the study are worth mentioning: current. First, Mg exists only in very small amounts in the blood and is not always an accurate indicator of intracellular Mg content. Second, in the present studyWalti et al. (2003) , the classification of diabetic retinopathy was based on phonoscopy and not the classification of background photography. This may have underestimated the prevalence of diabetic retinopathy

Most read articles by the same author(s)